A Cup of Earl Grey on The Back Patio, Anyone? 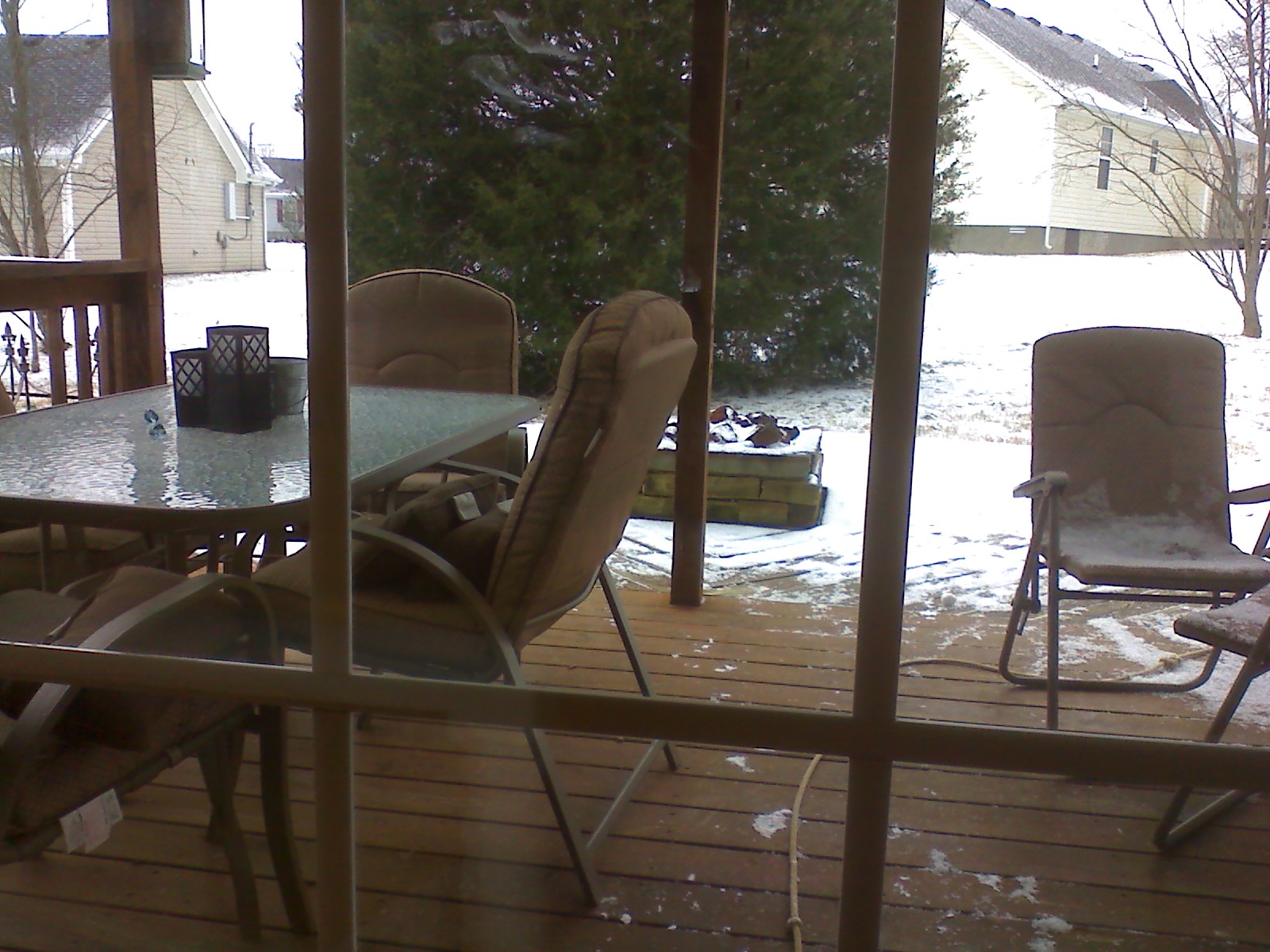 It’s a simple picture taken from a simple phone on a simple day with a subject asking a simple question.  The reasoning behind the picture, however, is a little more larger-scoped.

You see, one of the crazy things about my life that you would never guess is that I have a slight British streak about me and “fancy Dr. Who having a spot of earl grey tea.”  Yes, oddly enough, earl grey tea tends to de-stress me a little.  So does watching it snow.

One of the biggest comforts I have is sitting back and knowing that God is in control of everything.  Don’t get me wrong.  I don’t always do that.  Sometimes I like to demand that He show his cards.  Here lately I’ve been begging that God bring two babies into this world that there are risks and complications in their very existences in the womb.  One of which has now been born – one is … well… probably taking his first breath as you read this.  You see…I am not a patient guy.  The the “Serenity Prayer” had to have been written for me.

I have been Called to worship ministry quite some time ago and know that I am Called to be in a church using my Calling and Gifts in His service.  As a result of not having a full time position at the present time, however, I have often found myself questioning God’s plans and His time-table.

A couple of Sundays ago I led one of our congregations and left with such an awesome feeling.  I was flooded with emotions and wondered why, if God had ordained me to do this – had He not already delivered me to the church I was to do this at full time?  As I stood in a gas station paying for my gas, I seriously questioned God on this matter and defied Him to answer me “why? why won’t you go ahead and give me a job somewhere doing what you Called me out to do?”  As if either to go ahead and put me in my place…or to show me His awesome sense of humor….I turned my head to the left to see a display of leather bracelets with an inscription that slapped me in my face.  The inscriptiption said this:

“Everything happens at the time God chooses.  – Ecclesiastes 3:1-7”

I had to buy it.   So lately, I’m learning to humble myself…calm down and be a little more patient.  I’m learning that , while my daughter begged and pleaded for a white Christmas…she is just as happy that she has snow on the ground on January 9th.  I’m learning that while the world has told my best friend for years that it is impossible for them to have a baby and then…it was in God’s plans for them to get pregnant.  I’m learning that while doctors became concerned with the baby’s well being in the womb….God knew baby Matthew even then – and he is being born this very second and will soon return to the hospital to give him his first pastoral prayer with the family.

God is in control.  Wanna sit down and join me for some hot tea?

About the author Jason Whitehorn

Jason Whitehorn is a worship leader/pastor, Christian songwriter, CCM artist, mentor, public speaker and Christian music promoter/publicist. Jason's articles have been published in both online and National publications and has broadcast in both radio and major network television. Jason is the Redemptive Arts Pastor at Grace Church in the Indianapolis-Metro area.